Gerald AlCole brings back SKOOLDAZE this time on the Airwaves with entertainment, news and live talk shows. He debuted as host of The Sunday School Show on African FM, which brings together music across the musical spectrum, Gerald brings you the very best in modern and vintage world music, plus one hour of Gospel. As he always say: “I want to show that great music is great music and it reaches different generations… sometimes it’s not cool to like older music, but once you get past that, it’s just great music.

Gerald started musical DJing in Freetown in the early 80’s. He did not have his own equipment but used to carry his albums around to share with DJs, His love for Gerald AlBright’s music gave him the name AlCole… I do remember Gerald in the 1980’s when his mother and sister went on summer flight to England all he asked was for them to bring him the latest top 10 chart albums… They brought him back, Gregory Isaac’ latest album Front Door, Christine Robinson “where is my man”, Kool and the Gang 1980 Celebration’s, Sugarhill Gang “Rapper’s Delight and to name a few… I remember when he took his Gregory Isaac Front Door album to The Gel nightclub “Substitute and Front door” became a hit that very night.

While he was in school in New York he used to be the roaming DJ for most house parties in New York and New Jersey, sometimes in Maryland. Gerald was always roaming record stores every weekend, especially Tower Records on Broadway and 66th street, which used to be his hanging spot. his first Album bought at Tower records was by Rapper Dj Scott la Rock (South Bronx) released in 1987. His apartment in the Bronx/Jersey City used to look like a Library of books and vinyl.  Gerald ended up collecting hundreds of albums, before CD’s took over the DJ world. 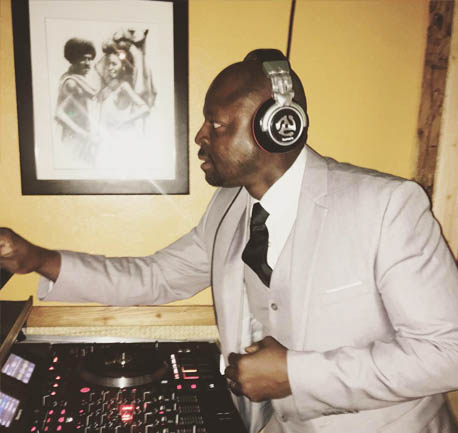 The 1980s saw the emergence of dance music, reggae and new wave. As disco fell out of fashion in the decade’s early years, genres such as post-disco, Italo disco, Euro disco dance-pop and reggae became more popular. Rock music continued to enjoy a wide audience.

More than anything, eighties music was heavily produced. Everyone knows the classic 80s sound: huge reverby snare drums, lots of delay on the vocals, electronic rhythms and synthesizers.

For the first time ever, musicians were regularly paying with a “click track”, or metronome. Because many 80s instruments were synced via MIDI, it was very important that the backing tracks (typically rhythm) were recorded in perfect tempo. While this change improved music in some ways, others may argue that music lost it’s humanity because of this. Before the 80s, many bands recorded live together, or depended on the drummer to keep the tempo.

Music engineers and songwriters had more tools at their disposal than ever before. That’s why a lot of music sounds like people playing (“experimenting”) with toys. Especially compared to the music of today, much of the early digital technology was 8-bit and the tonal quality just wasn’t that great. But it was a lively time for experimentation.

However the results can get quite comical when 60s icons first tried their hand at synthesizer (Paul McCartney comes to mind). The cheese factor simply blasted through the ceiling on more than one occasion.

The eighties also witnessed the infancy and eventual growth of hip hop. While not too many acts from the 80s stand up well against today’s artists, they laid the groundwork for what would later be achieved by thousands of modern hip hop artists in the future. Guys like Dj Scott la Rock (He is notable as a founding member of the East Coast hip hop group Boogie Down Productions), Slick Rick, Eric B. and Rakim, Public Enemy, LL Cool J and The Beastie Boys were all making legendary music at the time.

Although reggae’s biggest superstar, Bob Marley, passed away in 1981, reggae continued to grow in popularity during the 1980s. Bob Marley’s wife Rita and son Ziggy continued the Marley legacy, and bands like Britain’s Steel Pulse kept roots reggae going strong. Meanwhile toasters like Yellowman and Eek-A-Mouse popularized a new reggae-influenced style called dancehall that took Jamaica by storm. In 1984, Black Uhuru became the first reggae band to win a Grammy, marking a new milestone in the acceptance of reggae as a musical art form. Britain’s UB40 and Maxi Priest topped the charts with reggaefied cover versions of pop songs, and the Reggae Sunsplash festival became an international tour that introduced dozens of reggae artists to new audiences. 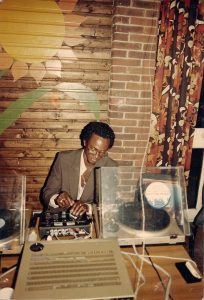 Original DJ started with two turn tables and mixer, fulfilling  the sound desires of party goers with King Sound from Maydew House , London, SE16 in the late 1970’s and 1980’s.  Used to carry tons of records, and equipment to parties, blues dance, weddings and more, during the period when man power came with playing music commercially. Versatile DJ  with unlimited knowledge of Artists, music from Africa, Europe and the Caribbean. If your listening falls within this era tune in to KCFJ on SkoolDaze “Revival Selections Without Objection”